Mitra Creative (@MitraCreative)‘s President, Karl Ufert, is on the Board of the New Jersey Chapter of the International Association of Microsoft Channel Partners (IAMCP NJ). IAMCP’s Tri-State Women In Technology organization held an event last night (4/7) at the new, state of the art, New York Microsoft Technology Center at 11 Times Square, which Karl attended (and assisted with pre-event promotion–he is IAMCP NJ’s Social Media Chair). 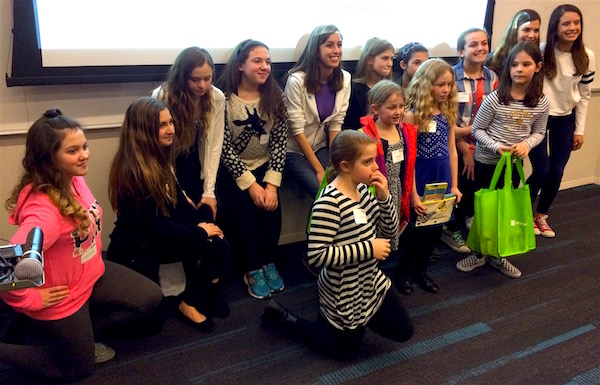 Parents, aunts, uncles and friends, brought their daughters, nieces, neighbors, etc. — young women between the ages of 7-17 — to this well-attended event for a great social and learning experience. Microsoft Partners and their affiliates, and children, were able to learn about TriState WIT, and hear practical, inspirational and fun talks from women who are prominent technology leaders–the two guest speakers being successful IT entrepreneurs, inside, and closely connected to, the Microsoft ecostructure.

Senior Microsoft executive, Nancie Williams, General Manager of the Microsoft East Region sales team for US SMB&D, spoke about her business background and how she “fell into” the technology industry where, “If I made my quota, the playing field was even” with her more predominantly male counterparts. Her independence was clear from the start, as her dad didn’t want her to attend school across the country, but “earned my own money”, applied to colleges far out of state, was accepted and told her father, “that’s where I’m going to go.” Nancie encouraged young women to remain nimble in their pursuits of their passions and professional moves: “Always look to the future.”

Cassidy Williams, Software Engineer/Developer Evangelist at the AI/video technology company, Clarifai, was the other guest speaker. She was one of the youngest women to be highlighted in Glamour Magazine’s ‘35 Women Under 35 Who Are Changing the Tech Industry’, and was also featured in the documentary ‘Big Dream’. She learned how to code because her “neighbor had a website” and she wanted to have one too, so she just started learning how to make it work. She encouraged tenacity for young women who want to achieve their goals–in her case, as a coder who “codes every day” (in addition to her own practice, she regularly participates in hackathons), in her pursuit of internships while in college, in her career choices, and in finding mentors and nurturing relationships with them. Cassidy’s defiance of so-called gender norms began with, as she told the audience, having been in pre-school, told by a boy that she “couldn’t play with Legos,” so she “told on him.”

Lisa Eyerkuss of IAMCP WIT, and CEO of New York and New Jersey-based, Corporate Training Group (CTG), led the program, and invited the WIT Board to join her at the podium, along with Cassidy Williams, to Emcee a game, wherein they asked the young girls in the room questions related to the technology industry and women leaders, and gave away prizes. Pizza and cupcakes were served — IAMCP NJ Chair, Jeff Goldstein (Managing Director of Mitra client, Queue Associates), gave out cupcakes to the young women during the session — and all of the girls went away with great tech goody bags! (From Lisa Eyerkuss: “Hi Jeff (Goldstein) and Titu (Sarder, Founder and President of NetCom Learning): Thank you so much for sponsoring our WIT event last night. It was a wonderful night and we are so happy you supported us by being there in person. And Jeff, it was adorable you passing around the cupcakes… We look forward to working together with the NY and NJ IAMCP to grow our chapters. Thanks again!”)

Also, since Karl is a member of the IAMCP NJ Chapter, he encourages everyone to follow them @IAMCPNJ on Twitter (and for local Microsoft Partners to join!).

See the album below for more photos from the event.